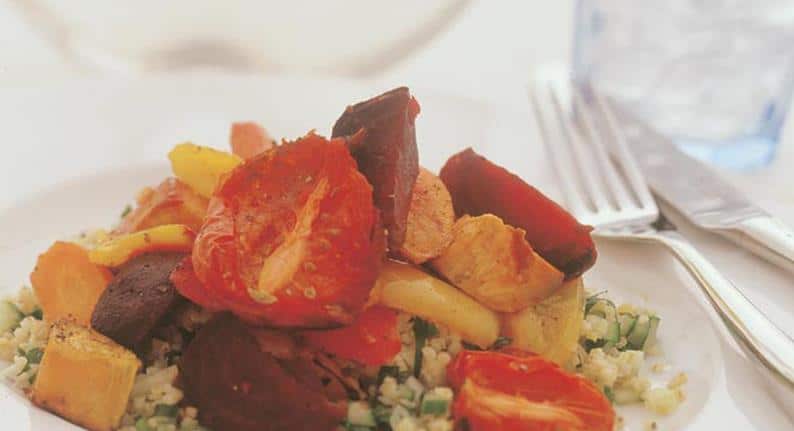 1 Lay the vegetables in roasting trays, drizzle with olive oil and sprinkle with the paprika and seasonings.

2 Roast in a hot oven at GM6/200C until tender. This will take about half an hour, depending on how large the vegetable chunks are.

3 Put peppers in a plastic bag, seal and allow to cool. This will allow the skins to slip off more easily later.

4 Whilst the vegetables are in the oven make the cracked wheat salad. Soak the wheat or lightly cook according to instructions on the packet.

5 Toss all the salad ingredients together, dress with the lemon juice and olive oil and season with a little low sodium salt and pepper.

6 Skin the roasted peppers and cut into quarters. Arrange the warm roasted vegetables on four plates on a bed of the bulghur wheat salad and top with a teaspoon of live natural yoghurt and a pinch of paprika.

There is a growing body of evidence to suggest that Western diets contain too much protein from animal sources. Bulghur wheat is a whole-grain lowfat protein source that is high in dietary fibre, plus calcium and B complex vitamins.

Meanwhile the vegetables contribute a range of vitamins, minerals, flavonoids and carotenoids. Beetroot is rich in folate and potassium. Carrots and sweet potatoes are rich in beta-carotene, which is a precursor in the body for Vitamin A. Yellow peppers contain flavonoids.

Onions and spring onions are rich in quercitin, which neutralises free radicals, and pre-biotic fibre that encourages bowel health.

Tomatoes are rich in Vitamin C as well as containing the carotenoid lycopene, which may be particularly useful in protecting against prostate cancer. 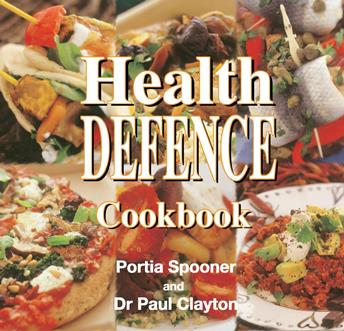 highlights the benefits from the main ingredients in each recipe, and the symbols show how those foods can reduce major health threats. The more symbols, the stronger the protection.