Soy is anti-cancer, good for the menopause, good for heart and bone health - and not just for women 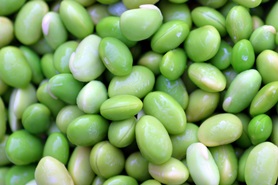 DEFINITIVE GUIDE TO SOY AT A GLANCE

About 1 in 11 British women will develop breast cancer at some time in their lives. In Japan, the figure is as low as 1 in 65.

Epidemiologists – scientists who study outcome patterns in populations – believe that soy may play a crucial protective role against cancer.

The Japanese diet contains considerably more soy products than the typical Western one does, and that’s thought to protect against breast cancer – and indeed other cancers.

Soy beans are extremely rich in isoflavones, and these seem to be among the most potent anti-carcinogens of all.

Men who think that soy is just for women should think again; considering the high rate of prostate cancer in the West, it seems that men have just as much to gain from adding soy to their diet. And soy isoflavones do NOT adversely affect male hormones like testosterone – see below.

Soy isoflavones can help in the menopause

Isoflavones can also mimic the effect of oestrogen in the body. Research shows that they can significantly alleviate the negative symptoms that many women go through during the menopause.

Two of the most distressing symptoms during the menopause are hot flushes [in the US, called "hot flashes"] during the day and night sweats during bedtime. They are caused because, as oestrogen levels fall, what’s called ‘vasomotor function’ deteriorates.

Blood vessels on the surface of the skin normally dilate when we are hot – allowing hot blood to move to the surface and the heat to escape. But this ‘vasomotor’ sequence is affected by the hormonal changes at menopause, causing the surface blood vessels to dilate randomly and the skin to become hot and sweaty.

It’s known that Japanese women on average suffer fewer menopausal symptoms than Western women – and they consume far more soy. Indeed, the average Japanese intake of soy isoflavones is at least 15mg a day, compared with 1mg average in the West.

After earlier conflicting evidence that soy could ease menopausal symptoms, a 2012 meta-analysis (a literature survey of existing clinical trials) confirmed that:

“Consumption of 30mg/day of soy isoflavones … reduces hot flashes by up to 50%.”

The key isoflavone nutrients in soy isoflavones are genistein and daidzein. These are found in soy beans, and to a lesser extent in chick peas and lentils, and they appear to be the most potent of the phytoestrogens.

It should be noted that the oestrogen potency of phytoestrogens is estimated to be less than 1% of oestradiol, the natural oestrogen, and this probably explains why earlier studies did not clearly show isoflavones to be effective in ameliorating the menopausal symptoms. After all, hormone levels vary significantly from woman to woman.

However, a recent (2017) study in the Journal of Clinical and Diagnostic Research once again confirmed that:

“Soy isoflavone improves the MRS score (a measurement of menopause symptoms) among both the perimenopausal (women transitioning into menopause) and postmenopausal women.”

A fair conclusion is that women who do not want to take hormone (replacement) therapy (HT or HRT) with oestrogen, and certainly women who have had breast cancer, should consider a supplement that includes soy isoflavones for relief of menopausal symptoms.

When NICE (the National Institute for Health and Care Excellence), published guidelines in 2015 for the menopause, they confirmed there is evidence that isoflavones may relieve vasomotor symptoms.

Soy isoflavones can help with PMS

So far, we have concentrated on the benefits of soy isoflavones for older women. But new research has highlighted the fact that soy isoflavones – in soy or a supplement – can reduce PMS symptoms.

“Our data on this is limited; however, women in Asia, who have high levels of phytoestrogens in their diet, do have fewer PMS symptoms.”

Lack of oestrogen after the menopause means that a woman’s risk of heart disease becomes comparable to a man’s. So it is logical that the plant oestrogens in soy isoflavones could be part of a heart health regime – for both women and men.

An article in Current Nutrition & Food Science confirmed that soy isoflavones were helpful in reducing blood pressure (see below), but that their effects were even stronger in preventing what doctors call ‘endothelial dysfunction’.

The endothelium is the thin lining on the inside of your blood vessels and arteries. It’s a vital part of the regular restriction and dilation that occurs over 60 times a minute as the heart beats. And all taking place within the almost 90,000 miles (!) of blood vessels that make up the arteries, veins and capillaries in the body.

The endothelium needs to be flexible and smooth to achieve healthy blood pressure and flow. In endothelial dysfunction, oxidation (free radical damage) causes lesions in this lining; LDL cholesterol sticks to these lesions and causes atherosclerosis – a build-up of fats that can then semi-calcify, all resulting in a narrowing and hardening of the arteries.

The result is atherosclerosis, hypertension and heart disease.

Isoflavones not only act as anti-oxidants to counteract excess free radical damage – they also reduce inflammation and help restore smoothness in the endothelium. A study in the European Heart Journal showed that as little as 12 weeks of isoflavone supplementation ‘reversed endothelial dysfunction’. The report concluded that:

“These findings may have important implications for the use of isoflavone for secondary prevention in patients with cardiovascular disease, on top of conventional interventions.”

Another meta-analysis of over 20 studies in Cardio-Vascular Discoveries Journal confirmed that isoflavones improved heart health, concluding that:

“Soy isoflavones had an effect of lowering blood pressure in hypertensive subjects.”

However, a well-conducted study reported in the American Journal of Clinical Nutrition found no difference in bone density after isoflavone supplementation. But it did find that increased protein intake improves bone density.

In a way that’s not surprising, because bone density is a function of much more than oestrogen. It needs adequate calcium, vitamins A and D that support the absorption of calcium, and minerals like magnesium and zinc, plus vitamin K, which are all needed to mineralise bone.

Population studies show that eating a high-soy diet is linked to a slightly reduced risk of developing breast cancer.

When small amounts of soy are fed to animals, their rate of breast cancer falls by nearly 50%, as does the incidence of prostate cancer.

A survey in the specialist journal Anti-Cancer Agents in Medicinal Chemistry confirmed these population observations concluding that:

“The majority of breast cancer cases are hormone-receptor-positive; therefore, soy isoflavones should be considered a potential anti-cancer therapeutic agent.”

But genistein doesn’t just inhibit cancer cells. In vitro it can cause cancer cells to revert to normal cells – which is an absolutely crucial anti-cancer property, called ‘re-differentiation’.

Genistein seems to have yet another another amazing property. It inhibits the growth of new blood vessels, and may therefore be able to starve cancers even after they have begun to grow.

Other nutrients can work with soy to increase cancer protection. If you follow a modified Mediterranean Diet with a supplement that includes vitamin D, vitamin E, selenium, carotenoids like lutein and lycopene, Omega 3, betaine, green tea and grapeseed extract, you will have the basis of a strong, evidence-based anti-cancer regime.

If soy isoflavones act as oestrogen mimics, are they safe for men – and do they affect testosterone levels or sex drive?

A survey of 47 studies on that subject is quite clear – they don’t adversely affect men. The summary in Fertility Journal concluded:

“The results of this meta-analysis suggest that neither soy foods nor isoflavone supplements alter measures of bioavailable T (testosterone) concentrations in men”.

But why? First of all, men produce the hormone oestrogen too – albeit at lower levels than women.

Secondly, we have seen that the hormone effect of soy isoflavone phytoestrogens is almost 100 times less than that of oestradiol, the natural form of oestrogen.

Thirdly, Asian men who consume many times more isoflavones from soy than Western men, have no lower levels of fertility and sex drive.

In fact, the International Society of Sexual Medicine answers the question: “Does consuming soy affect a man’s testosterone level?” with the simple answer: ‘NO’.

There is some evidence, however, that taking isoflavones does increase a woman’s desire levels, as lower oestrogen is linked to vaginal dryness and lower libido. A diet rich in B complex vitamins, vitamin E, with isoflavones (plus exercise and de-stressing) does seem to deliver a libido boost – especially during and after the menopause.

The US National Library of Medicine published a summary of all the research on the impact of soy isoflavones on prostate cancer.

Once again, men looking to achieve a significant reduction in the risk of prostate cancer would not rely on one ingredient like soy isoflavones.

But as we just advised for women, a Modified Mediterranean Diet with a supplement that also includes vitamin D, vitamin E, carotenoids like lutein and lycopene, Omega 3, betaine, green tea and grapeseed extract, provides the basis of a strong, evidence-based anti-cancer regime.

Soy isoflavones on their own are not the only or ideal health protective nutrients. NutriShield Premium is a daily comprehensive supplement containing 43 nutrients including 40mg of soy isoflavones with 28.8mg of genistein, 9.6mg of daidzein and 1.6mg of glycitin, designed by Dr Paul Clayton, former Chair of the Forum on Food and Health at the Royal Society of Medicine.

supplement with OPTIMUM levels of 43 essential nutrients including soy isoflavones, polyphenols and flavonoids from fruits, vegetables and other plants, Omega 3, betaine and greent tea. See more detail elsewhere on this site or click on the button.