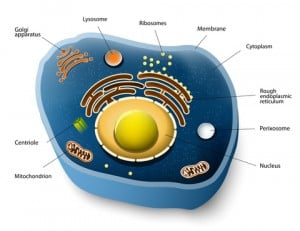 Inside every body cell are mitochondria (the plural of mitochondrion) and a nucleus. (There are other elements but these are the ones that we will concentrate on.)

Most cells – but not red blood cells – contain multiple mitochondria which are cells within cells and are often likened to miniature ‘power plants’. Heart cells and muscle cells have the most mitochondria – sometimes hundreds – because they have high energy demands.

Your mitochondria are where nutrients are broken down and metabolised in the presence of oxygen and turned into energy. The phrase we use for this process of metabolism is ‘burning calories’, which is why we heat up when we eat. This energy needs to be transported to where it is needed in the body and a molecule called ATP is that ‘medium’.

Production of energy needs a whole range of vitamins and minerals – including B1, B2, B3, B5 and B6 – which is why the B vitamins are sometimes called the energy vitamins. Whole grains are a good source of these B vitamins.

Iron is also part of the process but it can increase inflammation – which as we will see is a major cause of age-related disease, so only pre-menopausal women are recommended to take iron in supplement form. A good source of iron and B vitamins is whole grains.

The other nutrient that is vital in this process is Co-Enzyme Q10 or CoQ10. It is one of the few nutrients that can get inside the mitochondria and a lack of CoQ10 is a cause of lack of energy.

Although the body can produce CoQ10, its ability to do that declines with age, so supplements for older people should include it.

If you supplement with CoQ10, you should take it alongside oily food – or ideally combine it with Omega 3, because that helps it to be better absorbed. CoQ10 is also an anti-oxidant.

It is thought that statins deplete CoQ10 and according to a University of Maryland study supplementing with CoQ10 can help reduce some negative side effects of statins. They also report that CoQ10 seems to help lower blood pressure.(5)

The heart, brain and muscles require high amounts of energy to function properly. So if your mitochondria function below par, a result is fatigue. Moreover, mitochondrial dysfunction is now considered a major factor in many chronic degenerative diseases, such as heart failure, type 2 diabetes and Parkinson’s disease.

Finally, as outlined above, oxygen is needed to convert nutrient molecules to energy in the mitochondria. But oxygen is a very powerful reactant. And this process of energy production can produce molecules called Reactive Oxygen Species (or ROS). These are also called free radicals – which cause oxidative damage in the cell.

Not only can free radicals damage mitochondria but they can damage DNA causing mutations – (there is DNA in mitochondria as well as in the cell nucleus).

The cumulative end result of excess free radical (oxidation) damage can be cancer, atherosclerosis, and inflammatory diseases. And because free radicals can damage the lining of arterial walls, they can start a process that leads to cardiovascular disease.

However, this damage isn’t inevitable. Your body produces enzymes that can disable free radicals, but that process relies on minerals like manganese, selenium, copper and zinc, so adequate amounts of these in the diet are important – especially as the ability to create your own internal anti-oxidants seems to decline with age 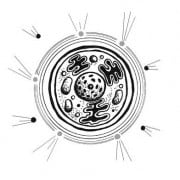 he illustration left represents how certain

enzymes, vitamins, minerals, carotenoids and polyphenols can help create an anti-oxidant ‘shield’ to protect a cell by absorbing or ‘quenching’ free radicals. The illustration right is a magnification of the process.

Anti-oxidant nutrients include the catechins in green tea, vitamin C. vitamin E, carotenoids like beta-carotene, lutein and lycopene, and a range of polyphenols (flavonoids) in fruits and vegetables. Darker red berry fruits and leafy green vegetables like spinach, kale, broccoli and garlic all have antioxidant capacity.

Vitamin E is not only an important anti-oxidant, but when it is taken in supplement form it also helps maintain the level of CoQ10. And in a good example of how intricate nutritional reactions are, vitamin C acts to regenerate vitamin E back to its most active form.

The importance of anti-oxidants is highlighted by research that shows that pollution in the air and toxins from agricultural pesticides increase free radical action.

Finally protein. The proteins you eat in food are broken down into amino acids and then re-synthesised to produce the proteins in every single body cell. So the better the quality of these proteins, the better the quality of body proteins you build. Eggs, cold water fish, grains, beans, nuts and seeds and occasional meat which has not been produced with growth hormones are all good choices. 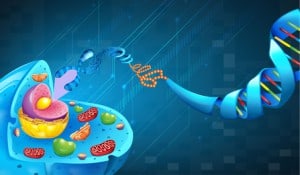 Inside the microscopic cell is a nucleus, (arrowed) and inside the nucleus are chromosomes and DNA.

So we’re talking about things that are really small!

Chromosomes carry all the information used to help a cell grow, prosper and divide. You have 46 chromosomes, which are condensed rods of DNA (Deoxyribonucleic Acid).

DNA consists of two thread-like strands that are linked together in the shape of a double helix.  It’s the molecule with the set of instructions, blueprint or ‘recipe’ which tells each cell what role it will play in your body. There are 2 metres of DNA in each cell!

Sections of DNA in specific patterns are called genes and form the individual units of heredity.

Genes contain instructions for making proteins. Each protein enables a cell to perform its own special function. For example,

If DNA is a recipe for creating a living thing, then genes and proteins are the ingredients which work together to build, repair, and run your body.

Switching genes on and off – the science of epigenetics

We have known for some time that most genes are active in the embryo, but when a gene is no longer needed, it is switched off.

Many genes are silenced at birth with increasing numbers of genes being turned off as we get older. The silencing of genes is thought to be a factor in ageing and even death.

What is new is the discovery that specific nutrients and even experiences (as well as pollutants and radiation) can cause genes to be turned on or up-regulated (expressed), or turned off or down-regulated.

The DNA sequence itself is not normally changed, but the new way in which the gene is expressed can lead to positive health outcomes (like lower risk of heart disease or diabetes) or negative health outcomes (like cancer), depending on the nutrient or gene. This process of gene expression is called epigenetics. Excitingly, epigenetics enables you to be a far more active director of your own health.

Billions of cells are created each day. They are needed because if cells are damaged or killed, new cells are produced to replace them. This is called cell division – one cell doubles by dividing into two and two become four etc. Each new cell makes a copy of all its genes.

During that process of cell replication, mistakes and damage occasionally but inevitably occur. If a cell has accumulated a lot of DNA damage, it can trigger the start of a cancerous tumour where cells do not stop growing and dividing.

Fortunately this doesn’t happen often, because your body has a number of ways to deal with damaged DNA. One is a positive process of programmed cell death (called apoptosis) which can clear away the damaged cell. The second line of defence is for the body’s DNA repair mechanism to kick in.

Work at Indiana University and published in The Proceedings of the National Academy of Sciences suggest that higher levels of selenium – a potent defensive anti-oxidant – may pro-actively prompt cells to initiate the cell repair response mechanism (2).

This chimes with a clinical trial in the 1990s which indicated that high selenium diets are linked to lower cancer risk and to studies that correlated areas of high selenium in the ground with lower incidences of cancer.

The Indiana researchers’ work indicates that they what they termed ‘the cancer-preventative’ daily dose of selenium was 200mcg a day. Foods that contain selenium include nuts and especially Brazil nuts.

But once again, guard against the interpretation that one nutrient is a magic bullet which makes a difference. The aim is for an eating plan including nutritional supplements that is a combination of the best researched nutrients and foods.

So, for example, research at Oregon State University indicates that zinc is also vital to the DNA repair mechanism.

And other research indicates that women with the highest consumption of carotenoids – lutein and zeaxanthin and astaxanthin appear to have a lower ovarian and breast cancer risk.

Reduced expression of DNA repair genes is a cause of faulty DNA repair. Animal studies show that lutein and zeaxanthin may reduce the rate and size of tumour growth by both strengthening DNA repair mechanisms, suppressing genes that promote tumour growth and turning on genes that suppress tumour formation.

Lutein and zeaxanthin are found in yellow, orange and leafy green vegetables. But the level for a protective effect implied over 8 servings a day to achieve that, so supplementation is logical.

As we’ve seen, the DNA repair mechanism is normally efficient – but that efficiency tends to decline with age.