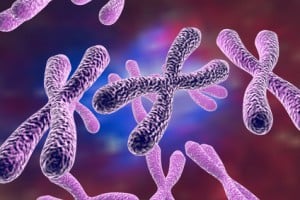 Chromosomes are condensed rods of DNA and have four ‘arms’. They periodically divide along with cells and replicate to make copies of the DNA they contain.

Each human cell normally contains 23 pairs of chromosomes, ie. a total of 46. One chromosome in each pair is inherited from the mother, and the other from the father. The 23rd pair, the sex chromosome, determines your gender.

Chromosomes allow the parent to pass his or her genetic material on to their descendants. Eggs or sperm cells have half of the parent organism’s genetic material, ensuring that mother and father each contribute half of their genes. It is the ‘shuffling’ of genes at the point of conception that make up your genome, accounting for the fact that siblings may be very different. You have approximately 24,000 genes.

Telomeres – a measurement of ageing 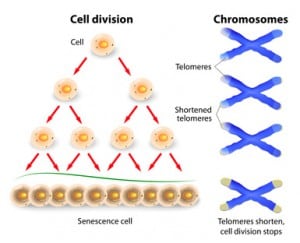 Each end of a chromosome is capped by a telomere – often likened to the protective plastic cap on a shoe lace.

A telomere is a string of repetitive DNA which protects the chromosome from damage. When chromosomes divide to make copies, the telomere ensures that all of the important genetic material is also copied.

Each time a chromosome divides, the end of the telomere shortens fractionally and when it comes to the end, the cell dies. These are called ‘senescent cells’. For this reason, many scientists believe that the length of your telomeres may be a good indicator of biological ageing and mortality risk.

Although senescent cells can no longer divide, they may remain and are injurious to health as they secrete toxic molecules that damage neighbouring cells and trigger chronic inflammation. Although the immune system does clear senescent cells away, this process gets less effective as we get older and the senescent cells accumulate.

Research reported in Nature last year (February 2015) showed that mice that were genetically modified to respond to a drug that killed off senescent cells lived healthier for longer – over 20% longer and tumour growth was reduced. This killer process, when it happens naturally, is called apoptosis. We know that some nutrients like Omega 3 and curcumin do encourage apoptosis.

A report (3) by M. Shammas of the Cancer Institute in Boston states that:

In another study, women exposed to stress in their daily life also had shorter telomere lengths than their equivalent cohort.

How? Stress is associated with release of glucocorticoid hormones by the adrenal gland. These hormones have been shown to reduce the levels of antioxidant proteins and may therefore result in increased oxidative damage to DNA and thence to accelerated telomere shortening.

The research strongly indicates that a relatively calorie-restricted diet is also a route to slower telomere shortening. This is almost certainly because calorie restriction equates to lower oxidative stress in the mitochondria.

We all know that exercise is good for you. Researchers Jiang and Song have shown that the frequency and duration of exercise is also positively correlated to less damage to DNA and longer telomeres (4). Other studies show that telomeres of athletes are longer than non-athletes, again due to lower oxidative stress.

The Shammas report concludes that:

‘Older people with shorter telomeres have three and eight times increased risk to die from heart and infectious diseases, respectively. Rate of telomere shortening is therefore critical to an individual’s health and pace of aging.’

Of course shortened telomeres are only markers of ageing and oxidative stress. The key is to take action that delays that shortening.

THE CONCLUSIONS FROM THIS 3-PART SERIES

Putting together the evidence from all three parts of this series Building Healthy Cells,we can summarise: