FOOD TO KEEP YOUR MICROBES HEALTHY

Fermentation – the key to a healthy microbiome

Different gut microbes feed on different types of pre-biotic fibre – which is another reason for increasing the range of fruits and vegetables you eat. Even the way you prepare your food matters – raw or lightly cooked vegetables provide more for your friendly bugs to feast on than overcooking them.

Stephen O’Keefe is a gastroenterologist at the University of Pittsburgh. He confirms that one of the keys to health is fermentation in the large intestine and that process needs a variety of plant food each supplying different types of fibre.

are so called because they resist digestion. Resistant starches are found in foods like bananas, oats, peas, lentils and beans.

Resistant starches feed certain types of bacteria which in turn create fatty acids that include butyrate. Butyrate has been shown to reduce inflammation, slow the rise in blood glucose levels after a meal and increase metabolism. It importantly also decreases the permeability of the gut wall, keeping toxins out of the bloodstream (Säemann et al, 2000).

Foods that are already fermented include blue cheeses, sauerkraut, kimchi (a traditional Korean side dish) and yogurt, and they contain microbes that are similar to those in your gastrointestinal tract.

There is, of course, a range of supplements called probiotics. Probiotics are an existing population of beneficial microbes that are taken in via yogurts or supplements to boost the quantity and range of microbes in the body’s existing biota. There is some research suggesting that some probiotics may be able to modulate the immune system, reducing allergic response and shortening the length and severity of colds in children.

Be aware that although yogurts do contain beneficial bacteria, many of them also contain quite substantial amounts of sugar. Check labels carefully.

Generally, however, it makes sense to emphasise pre-biotics in your diet that encourage the growth of ‘good’ existing bacteria, rather than rely too much on probiotics. But occasionally ‘seeding’ your gut with probiotics containing species of bacteria like L. plantarum, Bifidobacteria and Akkermansia may be a good strategy.

The Japanese have for generations consumed regular and substantial amounts of nori – a dried seaweed that is used to wrap sushi. This has resulted in the modern Japanese carrying a gene that allows them to extract nutrients from seaweed far better than Westerners. So one way the experts suggest to nurture healthy microbiota is to seek out different cuisines.

Other ways of caring for your microbes

We should be careful not to over-use antibiotics. For example, antibiotics cannot kill a virus, so taking an antibiotic for a cold is nonsense.

Moreover, many farmers are giving sub-therapeutic doses of antibiotics to their animals to make them gain weight. When this meat enters the food chain, it may well be affecting our microbiome for the worse. This is especially prevalent in beef rearing.

The intensive poultry-rearing industry is a further culprit. UK poultry producers increased their use of a class of antibiotics called fluoroquinolones from less than 1 tonne in 2013 to over 1,100 tonnes in 2014 – yet these antibiotics are banned in the USA, Australia and Denmark because their over-use in chickens has encouraged drug resistant strains of bacteria. This in turn has led to an increase in antibiotic-resistant forms of food poisoning in humans. The farmers’ justification for this alarming increase in antibiotics is that they are needed because the chickens are reared in very intensive conditions – for that read ‘over-crowded and dirty’!

There is particular concern over the rise of antibiotic resistance to Campylobacter, the UK’s most common form of food poisoning which infects about 300,000 people a year. In 4 out of 5 cases, the cause is poultry.

Of course, antibiotics have saved and do save millions of deaths by vanquishing many infectious diseases and you should always follow a doctor’s prescription, but the war on bacteria – as do all wars – also involves collateral damage.

There is evidence that children brought up on farms have lower levels of asthma and allergies. So encourage children to play outside in the garden and with animals – but certainly wash vegetables and fruits that may contain pesticide residue. 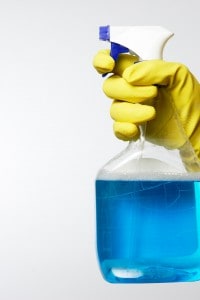 You may have heard before about the “Hygiene Hypothesis” – the theory that we have over-sanitised our environment and in so doing have reduced the effectiveness of our immune systems. Anti-bacterial sprays in the kitchen are an example of this excessive concern with hygiene.

When scientists in the microbiota field are asked about what they are doing as a result of their own research, they talk about cutting back sharply on processed foods.

“The consumption of hyper-hygienic, mass-produced, highly processed and calorie-dense foods is reducing the range of beneficial microbes in our gut” (“Genetic Pot Luck” n.d.)

Boost your own immune system

Your immune system is your first line of defence against any pathogen invader and indeed against internal rogue cells. Its key components are Natural Killer cells, macrophages and neutrophils, which patrol the body and deal with threats by killing them and ‘eating’ them.

Recent research has shown that a completely natural ingredient called 1-3, 1-6 beta glucans, extracted from the cell walls of baker’s yeast, can boost the effectiveness of these immune cells. It does so by increasing both their numbers and their activity.

When the Canadian Department of Defence researched over 100 potential immune system enhancers, a 1-3. 1-6 beta glucan now called Wellmune, was rated as number 1 for effectiveness. You can see the research at http://www.uni-vite.com/immunoshield.