These three people have one thing in common. They live in a ‘Blue Zone’. A Blue Zone is an area or a population group where people live much longer and stay healthy into extreme old age.

Researcher Dan Buettner collaborated with National Geographic demographers and longevity experts to identify these longevity ‘hot spots’. He calls them ‘Blue Zones’ in his book of the same title. Inclusion on the list is based on either the highest life expectancy or the highest percentage of people to reach 100.

We have come to think that illnesses like Alzheimer´s and cancer are inevitably linked to old age. But there are societies (and individuals) with diets and lifestyles different from ours which show that’s simply not true. When illness is postponed, the ageing process slows and a longer life is the end result, but it is really just a bonus.

So where are the Blue Zones and what can you learn from them that you can adapt into your lifestyle?

The longest-lived population in the world.

2. The mountainous Barbagia region of Sardinia

which has the world’s highest concentration of male centenarians.

3. The Greek island of Ikaria

with one of the world’s lowest rates of both middle-aged mortality and dementia.

has the second highest concentration of male centenarians.

The town is mainly inhabited by Seventh-Day Adventists who live 10 years longer than the average North American.

Other oft-quoted longevity hot spots have been claimed as Abkhazia in Georgia, Vilcabamba Ecuador, and Hunza Valley in Pakistan. However, serious scientific study has failed to confirm the basis for these claims.

These are very different societies, but all the ‘Blue Zone’ communities include significant numbers of people over 90 years who are upright, fit, have excellent vision and hearing, few signs of heart disease, memory loss or osteoporosis. They don’t retire but continue to enjoy life and relationships fully.

Contrast that with the comparatively rare individuals in our society who may make it to 90 years old, but are too often frail and weak, and sustained in care homes through endless medications. It is surely quality of life we are interested in. 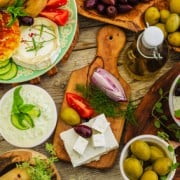 The Journal of the American College of Nutrition, in an article entitled “The Okinawan Diet” specifically noted its features as:

The term ‘anti-inflammatory’ is emphasised in both the National Geographic Blue Zone article (and book) and in the Okinawan Diet article.

As Russell Tracy, Professor of Pathology and Biochemistry, University of Vermont College of Medicine expresses it:

“Inflammation is an underlying contributor to virtually every chronic disease… rheumatoid arthritis, Crohn’s disease, diabetes and depression, along with major killers such as heart disease and stroke.”

The problem is that this type of inflammation builds up in tissues over time and causes the tissues to decay and eventually fail. That’s why internal inflammation is now thought to be not merely a cause of degenerative disease, but a key driver of ageing itself. And from the age of about 50, we are almost all at risk.

Taking the best from the Blue Zone diets

The common denominators of the Blue Zone lifestyles will probably be no great surprise to you – apart perhaps from the absence of modern drugs and medical technologies! It means that the choice of a long and healthy life is, to an important degree, in our own hands.

You’ll notice no mention of supplements. Yet Dr Paul Clayton, former Chair of the Royal Society of Medicine’s Forum on Food and Health, strongly recommends them. He included Blue Zone and other individual longevity examples in a 30-year study of healthy lifestyles for his own best-selling book Health Defence.

Why supplements? Because he points out that few of us ‘urbanised sophisticates’ could realistically live the Blue Zone lifestyle. And he identifies two other problems with our Western way of life that point to the need for a supplement, if we are to mirror the level of the Blue Zone protective nutrients:

Because we are so physically inactive, we typically need a mere 2000 to 2500 calories a day to maintain ourselves. To get the high level and wide range of protective anti-inflammatory and anti-oxidant nutrients that feature in the Blue Zone diets would require a much higher calorie intake than most of us could sustain without putting on weight.

This sounds counter-intuitive when obesity has become so widespread. But the truth is that our urbanised, sedentary society means that we use far fewer calories a day than the healthy societies do, or than we did ourselves 70 years ago before the ubiquitous motor car arrived – plus lifts, escalators and all the labour (calorie) saving devices we rely on. Less food means less nutrients.

How can you get Blue Zone health and longevity?

Dr Clayton is a Visiting Professor of Pharmaco-Nutrition and a Fellow of the Institute of Food, Brain & Behaviour at Oxford. His 30-year research goes well beyond the Blue Zone study. He has formed his conclusions from thousands of peer-reviewed studies on the positive impact of individual nutrients to create a ‘best of the best’ supplement.

The supplement that Dr Clayton designed is NutriShield. It includes polyphenols from green tea, grape seed extract and curcumin, together with Omega 3 fish oil, beta carotene, lycopene, lutein and soy isoflavones – all of which are powerful anti-inflammatory nutrients.

The vitamins and minerals are at a level that equates to a high-energy vegetarian diet. But it also includes other key nutrients such as Co-Enzyme Q10, vitamins K2 and D3, and betaine. All of these have persuasive evidence for long term health.

A comprehensive nutritional supplement can add back those nutrients that are hard to get from the sorts of foods we eat. But you have to do some work too!

Make the commitment to get out and be active at least three times a week. Exercise strengthens muscles, bones, the heart and the immune system. None of the people in the National Geographic study went to a gym – their main exercise was walking and activity as part of their normal life. Simply taking a walk every day can give you the same benefits.

Try to reduce stress. Sustained high levels of cortisol, the hormone produced in response to stress and anger, harm our bodies, increasing the risk of heart disease, stroke and cancer. Yoga, simple meditation techniques and even gardening can help.

These lifestyle changes are not so easy to start, but they become progressively easier the longer you go on … I promise.

Finally, what you won’t see on the common denominator list is high income. None of the Blue Zone societies is particularly acquisitive.