Whatever the original source – sunlight, food or supplements – vitamin D is turned by your liver into a hormone called calcitriol – or ‘activated vitamin D’.

Without supplementation you get most of your vitamin D from sunlight, because surprisingly small amounts are found in a relatively few foods – oily fish, eggs and fortified spreads. Indeed the NHS website confirms:

‘It is difficult to get enough vitamin D from food alone.’

Consequently, many people in the northern hemisphere are unknowingly vitamin D deficient against the standard of the Recommended Daily Amounts (RDAs) in the winter. 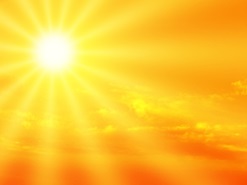 People who cover their skin all the time are definitely more likely to be vitamin D deficient, as are dark-skinned people, people who work indoors all the time and older people whose skin is thinner and can process less vitamin D from sunlight. NICE – the UK’s National Institute for Health and Care Excellence – supports supplementation for these groups.

And here is the beginning of a hot medical topic; because many health researchers now believe that the RDAs for vitamin D are too low, perhaps significantly too low.

Vital importance of Vitamin D in many health areas

You’ll already know that Vitamin D is important for strong bones and teeth. That’s because you need calcium and phosphorus to develop the structure and strength of your bones, but without without enough vitamin D your body can’t absorb the minerals.

But it’s vitamin D’s ability to influence genetic expression that produces many of its wide-ranging health benefits. Gene expression means that genes can be ‘turned on’ or up-regulated in their effect or ‘turned off’ or down-regulated.

For example pollution, UV light, viruses and certain chemicals can switch on oncogenes (cancer causing genes). When the function of a body cell is damaged it will normally self-destruct – a process called apoptosis. But an oncogene prevents this apoptosis, allowing the cancer cell to survive and proliferate.

A group of nutrients have been identified that lead to beneficial gene expression. They include Vitamin D – together with folic acid, betaine, vitamins B6 and B12, lycopene, curcumin and the polyphenols found in blue and red fruits. These nutrients are amongst others that appear to be able to switch on genes that normalize healthy function and some can also switch on protective genes – for example tumour suppressor genes.

The Nurses’ Health Study at Harvard University revealed that women who had the highest intake of vitamin D reduced their risk of developing breast cancer by almost 50%. Positive gene expression is likely to be the underlying mechanism behind the result.

There’s another function of vitamin D that supports its benefits as an anti-cancer molecule: its role in ‘cell signalling’ – the process by which cells within your body communicate properly.

Cells need to sense each other’s boundaries. When they cannot, the result can be uncontrolled growth – cancer. Researchers have found that vitamin D (and the carotenoids like lycopene and lutein) are important in the process of normal cell signalling.

But there are even more positive health functions of vitamin D. Optimizing your vitamin D levels can help protect against:

Dr Michael Holick is Professor of Medicine at Boston University Medical Center and a Fellow of the American College of Nutrition. He is a key vitamin D researcher and author of The Vitamin D Solution. One of his studies showed that vitamin D deficiency increased the risk of heart attack by 50 percent. Holick believes vitamin D is also important in reducing hypertension and stroke.

In one of Dr Holick’s studies, healthy volunteers taking 2,000 IUs of vitamin D per day for a few months were found to have upregulated 291 different genes that control many different metabolic processes. These include improving DNA repair, reducing free radical damage and boosting the immune system.

Vitamin D is a powerful immune modulator, helping reduce the risk of, or ameliorate the effect of, auto-immune diseases, like MS and inflammatory bowel disease.

Immune cells use vitamin D. A Japanese study showed that school children taking 1,200 units of vitamin D per day during the winter time reduced their risk of contracting influenza by approximately 40 percent.

Women who are vitamin D deficient can lose as much as 3% to 4% of their skeletal mass per year! Vitamin D supplementation, combined with a vitamin K2 supplement and Omega 3 – and exercise – would help counteract this.

In summary, a lack of adequate vitamin D has been linked to cancer, heart disease, asthma, type-II diabetes, osteoporosis, high blood pressure, depression, Alzheimer’s and some auto-immune diseases like multiple sclerosis, Crohn’s and Type-1 diabetes – though the link to multiple sclerosis is not yet strong.

Are you depleted or deficient in vitamin D?

Researchers such as Dr Holick estimate that 50 percent of the general population of the UK or US is at risk of vitamin D deficiency and more importantly insufficiency. One deficiency symptom is tiredness.

There is a test for blood levels of vitamin D which measures nanograms of vitamin D per millilitre of blood. The US Endocrine Society Clinical Practice Guidelines indicate a supplement level of between 40 to 60 nanograms per millilitre for the prevention and treatment of vitamin D deficiency. For people with an existing chronic disease it may well be higher.

If you have not had the assay, however, nanograms per millilitre doesn’t mean very much. Translated into what level of supplementation you should consider, the following should help:

But beware mono-therapy –  use synergistic combination

Nutritional mono-therapy – ie taking a single vitamin or nutrient on its own – is never a good strategy. It’s the synergistic combination of nutrients in food that is protective and the reason why you need combinations of nutrients in your supplement.

The least you need to combine vitamin D with is vitamin K2. The role of K2 is to help move calcium into areas in your body, such as your bones and teeth. Vitamin K2 also helps remove calcium from areas where it shouldn’t be, such as in your arteries and soft tissues.

But for optimum effect you would also combine with Omega 3 fish oil, magnesium, polyphenols like curcumin and carotenoids like lutein and lycopene.

My overall conclusion is that a supplement level of 20 mcg – 800IUs is probably the minimum therapeutic level, combined with at least 25 mcg of vitamin K2 and 650 mg of Omega 3 polyunsaturated fatty acids from fish oil – which is what is in NutriShield.

supplement with OPTIMUM levels of essential nutrients, including the highest level of vitamin D allowed under UK legislation (20mcg/800IU ie. the government Upper Safe Limit). See more detail elsewhere on this site or click on the button.