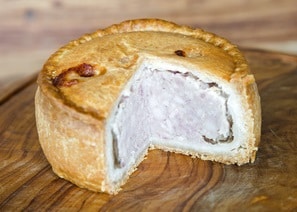 I must confess to a sneaky liking for the occasional pork pie. Now it will have to be VERY occasional!

Researchers at Brigham and Women’s Hospital in Boston, reporting in Annals of Neurology, identified the ratio of unsaturated fats to saturated fats as a key factor in Alzheimer’s. Women in their 6,000 person study who ate the most saturated fats from foods like red meat, French fries, cream and butter performed worst on thinking and memory tests.

But why?  There appear to be three mechanisms at work.

First, we know that saturated fat can raise blood levels of low-density lipoprotein (LDL) the unhealthy form of cholesterol. Diets high in cholesterol and fat appear to speed up the formation of beta-amyloid plaques in the brain. These plaques are the sticky protein clusters linked to the damage that occurs in the brains of people with Alzheimer’s.

Secondly the build-up of cholesterol plaques can damage brain tissue, either through small blockages that cause damage to blood vessels or even silent mini-strokes. Either way, brain cells are deprived of the oxygen-rich blood they need to function normally, which can cause thinking and memory problems.

Thirdly, higher levels of saturated fat and cholesterol may cause a gene to be expressed called apolipoprotein E, or APOE. This gene is associated with the amount of cholesterol in your blood, and people with a variation of this gene, called APOE4 are at significantly greater risk for Alzheimer’s disease.

“About 65% of individuals who wind up with dementia due to Alzheimer’s disease in their 60s and 70s have that (APOE4) gene.”

In studies across 11 countries, fat consumption (type and quantity) appears to be closely correlated with the prevalence of Alzheimer’s disease.

The lowest fat intake and Alzheimer’s rates are in China, where the diet and fat source is largely vegetable based.

The highest fat intake and Alzheimer’s rates are in the United States with far higher dietary animal and saturated fat sources.