Experts agree that eating fruits and vegetables is a good idea, health-wise, though even the current recommended ‘dose’ of five-a-day – almost twice what the average UK consumer actually eats – is widely acknowledged to be sub-optimal (1).

The food industry has taken note, and it has also noted that many of us prefer processed to basic foods. Companies have capitalised on this by producing a wide range of processed foods with soft (and meaningless) fruit ‘n’ veg related claims.

Do you, for example, drink the increasingly popular bottled “iced” teas because they are ‘healthier’ than fizzy drinks? If so, you might be surprised to hear that most of them contain very few of the protective polyphenols that make green and black tea a healthy option.

Data presented at a meeting of the American Chemistry Society revealed that while green and black teas contain 50 to 150 mg polyphenols per cup, the bottled iced teas were considerably more dilute, ranging from 80 down to 3 mg per bottle, or 40 to 1 mg per cup (2). The manufacturers have cut down the polyphenols to make their drinks more palatable to a generation raised on the insipidly sweet carbonated beverages that dominate the marketplace; but they have sold our health down the river.

At the same meeting, Japanese scientists at Obihiro University in Hokkaido announced a way to enhance the nutritional qualities of the humble spud. This is interesting news; the potato is the most widely consumed vegetable, but is not currently included in 5-a-day schemes because it is mostly starch, with little phyto-nutritional value. [phyto means related to plants]

Many of the compounds we think of as phyto-nutrients are in fact phyto-alexins, which plants use to defend themselves against stressors such as infection or drought. The Japanese took this thought to its logical conclusion, stressed their potatoes by exposing them to ultra-sound or electric shocks, and found that this boosted their levels of polyphenols by up to 60% (3). Shocking potatoes might seem technically laborious, but it was easily done by throwing the tubers into salt water and then passing a small electrical current through the water!

Big potato processors will have seen this research, and some bright advertising executive is probably already dreaming up ads for ‘high antioxidant chips’.

Like ads for bottled teas, however, these will be misleading. It is true that potatoes contribute to people’s polyphenol intake (4), but this is only because we eat so much of them; they contain low levels of these valuable compounds, and an additional 60% of low is still low.

Potatoes are very far from a health food. They have a high glycemic index (ie. when eaten, they pour large amounts of glucose into the blood stream); and as a result, they have a very low nutrient density.

To make matters worse, the important compounds are almost exclusively in the skin and are lost by peeling, so that there are none at all in traditional mash, chips or French fries (5).

The sad fact is that processed foods may be value-added – to the food industry – but most of them are not health-enhanced at all. For the most part, you are better off sticking to basic fruits and vegetables.

If you want to get fancy, go for foods with a high nutrient density such as acai, blackberries, mulberries, raspberries, loganberries, arronia, coffee berries (and beans) …

There are some interesting newly available foods worth looking out for. 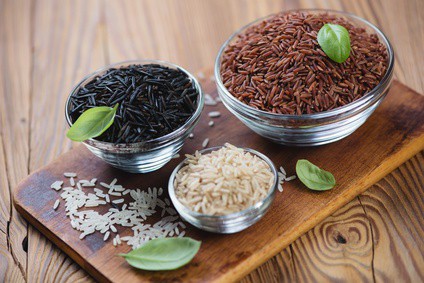 Black rice, however, or ‘forbidden rice’ as it was known in ancient China, is a rich enough source of cancer-preventing anthocyanins (8) to rival blueberries and blackberries (9)! As it also contains high levels of gamma tocotrienol (a very interesting form of vitamin E), plus a substantial amount of fibre, black rice is most definitely a health food. [NB This is NOT the same as the Spanish or Italian dish arroz negro, which – while delicious – is merely white rice coloured with squid ink.]

Purple corn is another newly discovered health food, and an even better source of anthocyanins than black rice; in fact, it appears to contain 4 times more anthocyanins than the blueberries which used to be the benchmark for these compounds (10, 11).

Purple corn has been used in Peru for thousands of years in a drink called chicha moranda, which is produced by boiling purple corn with pineapple, quince, green apple, cinnamon, cloves and lime juice. This sounds interesting if astringent, but would be hard to find in Britain unless you have Peruvian friends!

Purple corn tortilla chips, however, are more widely available and a positive alternative to the white and yellow varieties. In fact, when consumed with home-made salsa (tomatoes, garlic, chillies, no salt), this makes up a very health-functional snack.

Finally, next time you’re buying cooking oil in the supermarket, pass by the extra virgin olive oil and look instead at the ethnic section, where you could find red palm oil.

This muddy orange oil is a rich source of carotenoids, so much so that when food scientists used it to replace 20% of the oil in chocolate, levels of carotenoids increased 20-fold, and levels of vitamin E increased 4-fold (12). These highly significant improvements in nutrient density were achieved without any trade-off in terms of taste, and point the way ahead to seriously functional confectionery.

You could wait for the new, improved chocolate bars to arrive, or you could simply start to cook with this highly nutritious new (old) oil.

Therefore check the origin of red palm oil exactly as you would standard palm oil — look for sustainable sources and/or organic producers.